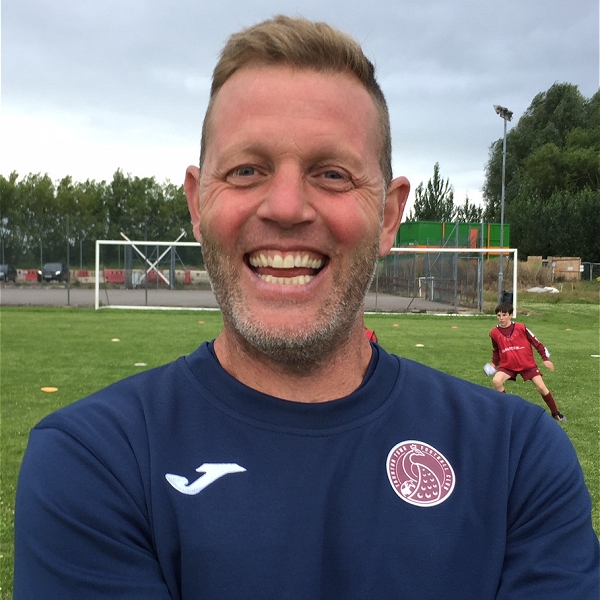 Paul left school in 1987 and signed apprenticeship forms for Bristol Rovers FC .His circumstances changed and Paul returned from Bristol after a few months. He continued where he left off and carried on playing for his beloved Taunton Town FC u17, u18, reserves and then progressing to the first team.

He spent a long and successful career at Taunton the highlights being 2 FA Vase final appearances one at the world famous old Wembley stadium in 1994 where they lost 2 1 to Diss Town after extra time and the slightly more recent game at Villa park in 2001 where as captain Paul raised the trophy. Paul is pictured at Wembley with Andy Payne and Damon Palfrey.

Paul says, "Andy was fantastic player he was also son of my hero and Taunton legend Tony Payne who played over a 1000 times for TTFC. Damon, is without a doubt the best footballer I have ever seen. It still baffles me now why he didn't get right to the top. I think he was born 10 years too early! What an incredible talent and he had everything required to be a top class professional. He narrowly missed out for England schoolboys, and had a host of clubs wanted to sign him including Harry Redknapp. He chose Bristol City and spent 2 years there before getting released, due to his size!! That would never happen now. He was technically superb, completely both footed, lighting quick, great ball control, great intelligence of the game, strong in the tackle, scored and created goals for fun."

Paul's career was cut short in 2002 when he ruptured the ligaments in his left knee. After a short spell at Wellington FC as manager Paul came back to TTFC as assistant manager, before taking the reigns as manager in 2009. finishing in 2012.

A break from football followed, that was until his son started falling in love with the beautiful game. With all his years of experience and having qualified as a UEFA B coach in 2015, Soccerbox is the ideal platform for Paul to use to benefit up and coming players.

Chris left school in 2012 and studied Sports Development, Fitness and Coaching at Somerset College. Alongside his studies, Chris was active in volunteering with numerous coaching companies and events to gain experience.

Chris currently manages the Taunton Town U11 age group, who compete in the Junior Premier League.

Harry left school at the age of 17 and acquired an Sports Development Coaching and Fitness Distinction qualification at college. He has worked at one of the top schools in the UK, Millfield Preparatory and Senior School and has been coaching to gain experience and develop as a coach.

Harry has coached at a variety of different levels and has learned throughout his short career in the world of football. He coached at Yeovil FC Academy, ranging from the U9’s to the U18’s. He has acquired his level 1, 2 and UEFA B (level 3) coaching qualifications at the age of 22. He was also the Academy Manager of Operations. Organising the day-to-day academy schedule from training to the games programme.

He works at Bristol City Academy, again working in the operations department. This is his first year at Taunton Town, and he is looking forward to the challenges of working with the U15’s in the Junior Premier League and working with new players and staff.

The 4 corner model for player development outlines the range of influencing factors which may need to be addressed as a young player grows and develops in the game. Using the 4 corners will enable us to help them reach their full potential. Each of the corners is connected and relies on support from the other 3 areas.

The corners are Technical, Physical, Psychological and social.All our sessions start with a Technique practice which is unopposed, this flows into an opposed Skill practice followed by a small sided game where the new techniques they’ve learnt can be developed in game situations.

These sessions will include We will be operating our popular camps again over the Summer Holiday period over three weeks:
Week 1 Monday 1st- Friday 5th August
Week 2 Monday 8th- Friday12th August
Week 3  Monday 15th- Friday 19th August
From 9am until 3.30pm giving a great day of football.
The cost will be £85 each week. Book now to avoid disappointment!
A daily rate of £20 per session will be available to book at the end of July.